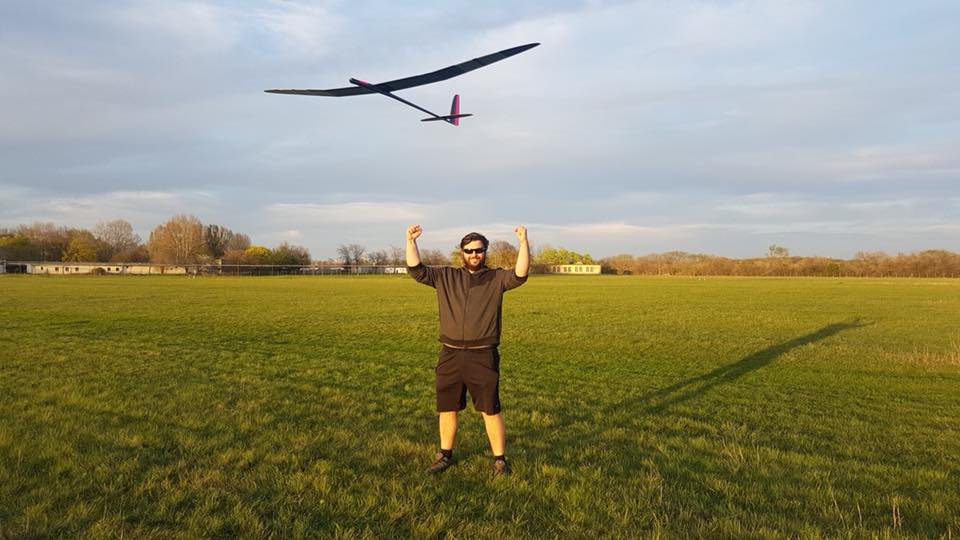 The Ultima 2 is DS composites newest F5J competition model. Optimized specifically for F5J, it sports a brand new wing, fuselage and tails and features a 3 piece wing (3.65 meters or 4 meters versions), a two-piece 2.4 friendly fuselage (nose and main fuselage) and detachable tails for easier transport. The two parts of the fuselage are interlocked by the wing when mounted on the fuselage. This means to assemble the fuselage you just need to slip the nose piece on the main fuselage, plug the motor connector, install the wing via 2 screws and the nose is locked into position and ready for flight. No tape, no dedicated screws, perfect alignment. An added bonus is the ability to replace the nose and motor system with a nose that has a stronger motor system mounted for windy conditions. Interchangeability allows changing the motors between models within just a handful of seconds and assembly at the field is as easy as can be.

Unlike many F5J’s wings which are designed as dual-purpose wings for F3J, the Ultima 2 wing was designed without the strength considerations of F3J launch. This allows the reduction of both the width and thickness of the wing and enables a design which boosts the performance of the wing considerably. The Ultima 2 wing is 234 mm wide at the root and sports 8 optimized airfoils along the span starting with a 7% thick airfoil at the root and ending with a 5.4% airfoil at the tip.

The Ultima 2 wing is available at 2 wing lengths, 4 meters and 3.6 meters. Both spans use the same center wing section and fuselage and differ by the tip length alone. The Ultima 2 “short tips” is aimed to be more agile and the Ultima 2 “long tips” incorporates slightly higher performance in both L/D and in rate of descent.

Both wings and fuselage fold down to a length just below 150 cm. Early on it was decided that saving 30-40 grams and putting them back into the wing to make it stiffer was more important than a model which folds down to 120-110 cm instead of 150 cm. Therefore, the center and the longest part of the fuselage are just shy of 150 cm.

The fuselage of the Ultima 2 is designed to be both functional as well as high performing. Airflow on F5J fuselages is turbulent due to the effects of the propeller at the very front of the fuselage. The resulting turbulence on the fuselage increases drag proportionally to the surface area of the fuselage and not directly to its cross section. Therefore, a small increase to the cross section adds very little drag to the fuselage while enabling an easy installation with even easier ballast arrangement. The slightly increased cross section allows more options of equipment and easy access to components along with room for batteries of different sizes and positions to adjust the CG.

The wing is mounted on the fuselage by means of a small pylon which reduces the drag but also enables an excellent grip to the fuselage even in strong winds, a very important feature for safe launching in gusty weather. The tail boom is a balance between low surface area aimed at drag reduction and volume for stiffness and strength.

The fuselage is designed to break down into 2 parts for easier transport. At first, we explored a 2-piece fuselage which parts behind the trailing edge of the wing but the cost of moving the components to such an aft position is the need to balance the model with a heavier battery or motor so a light model will require less material and a subsequent reduction in strength to achieve its target weight. After investigating several options, we opted to position the servos in a designated compartment in front of the leading edge of the wing and have the nose be removed by a “nose cone” of sorts which includes all motor system parts such as the motor, propeller, controller, battery, and altimeter and a canopy for easy access. The nose is slipped over the fuselage and only the motor control needs to be plugged allowing a servo extension to act as the connector, thereby reducing installation weight to a minimum.

The nose is also designed to be 2.4 friendly so the antennas can be mounted inside the fuselage to reduce drag and prevent damage.

The servo installation in the fuselage allows the use of the same servos of the wing in a similar installation so you need to keep only one type of servo as a spare for the entire model.

The tails of the Ultima 2 have been redesigned with both drag and handling in mind. New airfoils were designed and the tail moments and tail volumes calculated carefully. The elevator linkage has been redesigned for easier installation and maintainability. Controlling the tails is done via carbon pushrods in Teflon sleeves.

Production of the Ultima 2 is done in Aluminum pressure molds. Wings and tails are full Rohacell core. Fuselage is pressure molded similar to DLG fuselages. Lessons have been learned from the Ultima 1 and the molds were designed lighter and more accurate and also analyzed to reduce deformations in the production process. The mold for the center section is a piece of art milled in one part with the dihedral angle in the middle. This prevents deformation and improves the surface quality at the very root. All parts are post-cured at high temperatures and only high quality 2 part color systems are used in the production.

Strong – Reinforced wing skins, reinforced spar and fuselage. For winds and turbulence. A more robust version for when conditions require more weight and thermals are strong. Able to carry up to 650 grams of ballast. Long wing – 1450-1550 gram, short wing – 1400-1500 gram.

Interview during the first WC F5J with our Vortex 3 and Ultima 2 designer Roy Dor. Roy tells everything about the development of the Ultima 2 and the collaboration with Denis Skrabl from DS-Composites